In the Fall of 2016, Museum Studies students (Sarah Berndt, Sam Christenson, Tess Frydman, Sharon Hess, Kate Lenart, and Sara McNamara) developed a policy brief on why the State of Delaware needed a law guiding the disposal of unclaimed and undocumented objects by Delaware’s collecting institutions. Generally known as ‘abandoned cultural property,’ these objects come into a museum’s collection without any paperwork or proof of ownership (for a donor, a lender, or for the museum) and collecting institutions have been unable to legally deaccession these collections. 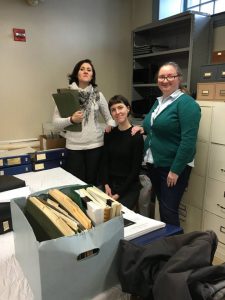 Some of the proud members of ACP Task Force (Sharon Hess, Tess Frydman, and Sara McNamara).

The students’ policy brief was shared with a state legislator and the board of the Delaware Museum Association. Even after the class ended and half of the team graduated, the students were involved with meetings in Dover as the bill was drafted and have remained actively involved throughout the process.

All of their hard work has finally paid off.

On January 25, 2018 their bill, HB231, passed the Delaware State Legislature. It is currently awaiting signature from the governor and will go into effect immediately thereafter.

The students will be discussing their advocacy work and the new law at the 2018 Small Museum Association Conference on February 20.