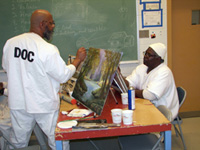 In 1979, the James T. Vaughn Male Correctional Center in Smyrna, Delaware has run a program that brings art to inmates. Participants in the Prison Arts Program take a series of art classes taught by an inmate art instructor and supervised by the Program’s Coordinator, Carmita R. Kelley. Paintings created by the program members are then sold, with 70% of the proceeds from each sale going into the artist’s commissary account. The rest is used to pay for the supplies used in the program. According to their website, arts education teaches “literacy, geography, civics, interpersonal relationships and cultural awareness.” More importantly, the program attempts to instill a greater appreciation of the outside community for when they are released.

Bridget Killian, an art history master’s student, believes that is not enough; Delaware needs to expand the local art scene to include incarcerated artists.

In an effort to bring greater visibility to the program, Killian pushed to bring an exhibition of the artists’ work to campus. After spending a year on the project (including a brief hiatus following the prison riot), the exhibition is here.

“Parallel Visions, Parallel Lives” will be on display until March 1 in the Recitation Hall Gallery. Featuring three walls of paintings from inmates in the program, the fourth is dedicated to artist Roy Hickman. Hickman participated in the program while incarcerated and has continued painting since his release. The exhibition was recently featured in an article in the Newark Post. 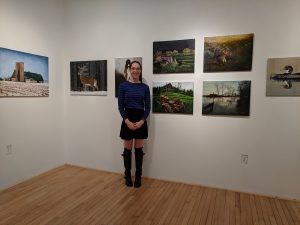 All of the paintings featured in the show are for sale and proceeds support both the artists and the program.