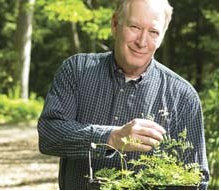 A leader in plant conservation in New England, Brumback initiated the New England Plant Conservation Program (NEPCoP), a regional voluntary collaborative of representatives from over sixty organizations. Founded in 1900, the Society is the nation’s oldest plant conservation organization and a recognized leader in native plant conservation, horticulture, and education. The Society’s headquarters, Garden in the Woods, is a renowned native plant botanic garden in Framingham, Massachusetts, that attracts visitors from all over the world. From this base, 25 staff and more than 700 volunteers work throughout New England to monitor and protect rare and endangered plants, collect and preserve seeds to ensure biological diversity, detect and control invasive species, conduct research, and offer a range of educational programs. The Society also operates a native plant nursery at Nasami Farm in western Massachusetts and has seven sanctuaries in Maine, Massachusetts, New Hampshire, and Vermont that are open to the public.  He led the initiative that resulted in publication of Flora Novae Angliae, and co-authored A Guide to Invasive Plants in Massachusetts (2006), and Flora Conservanda: New England, the NEPCoP list of plants in need of conservation (1997).  For more than two decades, he has worked on recovery projects for four federally endangered species. He is a graduate of Washington and Lee University, and received a degree in Public Horticulture from the University of Delaware, along with a certificate in Museum Studies.