In July, Sam Christenson, a 2017 graduate of the Museum Studies Graduate Program, joined the staff of the Galveston Railroad Museum (GRRM) in Galveston, Texas as curator. Less than two months later, Hurricane Harvey came to visit.

GRRM statues taking a dip in the ‘wading pool’.

In anticipation of the storm, the GRRM staff decided to close on Friday, August 25th after they rushed to prepare the museum for the worst, including evacuating two locomotives and four railcars. The following Tuesday had the most rainfall, drowning the floor in nearly a foot of water in one of the buildings while partially flooding another. The rail yard became a lake of knee-deep water. 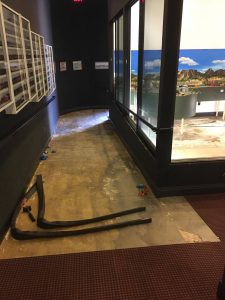 Removing wet flooring can be a sticky situation.

After the water receded, they assessed the damage. Most of the destruction was to the flooring. Thanks to careful preparation, the collection was secure. The GRRM staff spent the following Wednesday, Thursday, and Friday ripping up wet carpet (Sam’s knees were accidentally glued to the floor at one point) and prepping the Museum for reopening.

Proving that you can’t keep a good curator down, the Galveston Railroad Museum opened to the public on Thursday, September 6th. 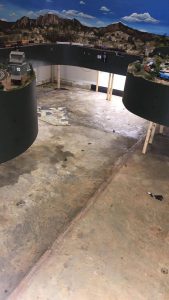 They are still waiting on new carpet.