It all began as class project in the Intro to Museum Studies course. Even though the class ended in December 2016, the students were just getting started. After almost two years of meetings with politicians and museum professionals, along with a healthy dose of advocacy work, House Bill 231 was signed into law by Governor John Carney in a ceremony in the Old Capital Building in Dover on March 8, 2018.

The law, which goes into effect immediately, addresses what is known as Abandoned Cultural Property and gives clarity when it comes to a major grey area in collections management. 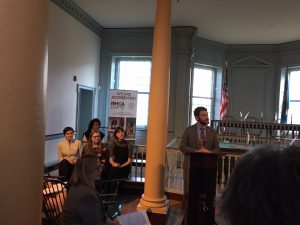 Thanks to the efforts of our students, Delaware museums now have a tool to gain clear title to objects in their possession that had no clear owner or documented history.